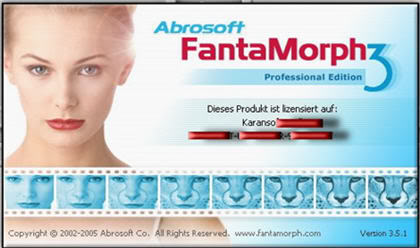 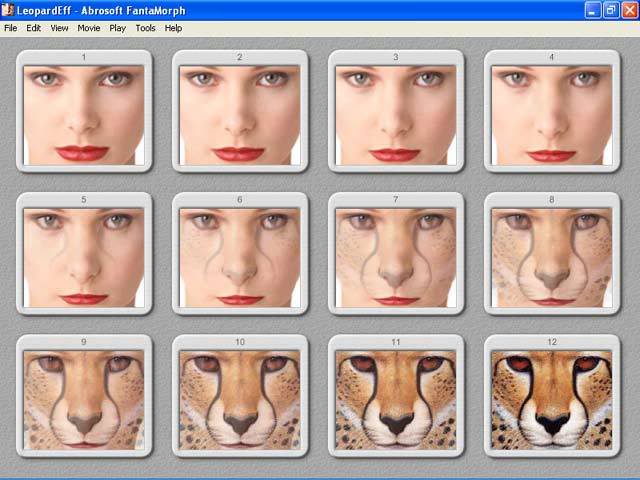 Abrosoft FantaMorph is powerful and easy-to-use morphing software for the creation of fantastic image morphing pictures and sophisticated animation effects. With our revolutionary rendering engine and a super-friendly user interface, creating morphing pictures and action sequences from still images has never been easier and faster!

Abrosoft FantaMorph is designed to create morphing images and animation sequences in real time. The new rendering engine takes advantage of hardware acceleration, and the rendering speed easily goes up to several hundred FPS. The speed makes it possible to play final effects in real time without exporting to a file. FantaMorph supports most image formats including BMP, JPEG, TIFF, PNG, GIF, TGA, PCX, and even professional 32-bit with alpha formats. Exporting to image sequence, AVI, animated GIF, flash, screensaver, and standalone EXE. You can crop, rotate, flip, and adjust source image, all with FantaMorph's built-in tools, without having to go to any additional software. You can even create amazing add-on movie effects in less than one minute.

• New Add-in: Face Extractor - With the new intelligent tool, Face Extractor, the program can automatically extract the face portion from an image. Only available in FantaMorph Deluxe.
• New Add-in: Face Locator - When morphing from one face to another, the program can automatically detect the facial features (eyes, nose, mouth, etc.) and place key dots on appropriate positions. This will extremely save your time. Only available in FantaMorph Deluxe.
• New Add-in: Face Mixer - Compose a virtual face with multiple real faces. You can adjust the Feature/Shape proportion of each face to get unlimited results. Only available in FantaMorph Deluxe.
• Create Multiple Morph - Now you can morph multiple images in a single project, this makes it possible to edit/preview/export a multiple morph without using Image Sequence Packer, and also easy to understand and quite comfortable to use.
• Import/Export Editing Frame - Now you can export an editing frame (a source image with its key dots) to a .fme file and then import it into a new project when needed.
• Export Source/Target Frame - Now you can directly export the source/target frame to a bitmap file.
• Fade In/Fade Out - Now you can only import one image as Image 1 or Image 2 to get a fade in or fade out effect, you can also choose the two new morph types to create the simple but useful effect.
• Import/Export AVI Video - Now you can import AVI video files as Image 1 or/and Image 2, this makes it possible to morph between two AVI files. All frames of the source AVI files can be exported to resulting morphs.
• Use Keyboard to Zoom In/Zoom Out/Best Fit Current View - A fast way to change the view scale of the sources, preview or frame sequence.
• Use Keyboard to Move Dots - An accurate way to move a dot or selected dots by 1 pixel.
• Show Overlap - When this option is turned on, all the overlap area caused by mesh tangling can be obviously found so that you can edit key dots accurately.
• Improved Memory Usage - Now the program saves 30% on memory usage so that you can load much more source images or get better performance.
• Improved EXE Export - Now you can export the background sound/music to EXE. Also, Full Screen mode is now supplied in EXE.
• Improved Image Sequence Packer - Now you can pack a background sound/music into resulting files.
• More Built-in Languages - Simply choose one from the long built-in language list without having to download it from our site.