Notice : You have To Have The Data.pk2 Or This Will Not Work
Notice2 : I have been working for few days straight on this Im going to take a few day break so expect
New Update sometime next week, unless I decide to release earlier.

This makes ecsro so much more fun if someone could help me with weapon skills I will give you the download for this I just got tired of normal ecsro and I know everyone else is as you can see in video what I have finished the only thing now is the weapon skills and im having trouble getting them to work so like I said if you can help me out would be appreciated!

notice: These nukes are huge they love to eat your frames 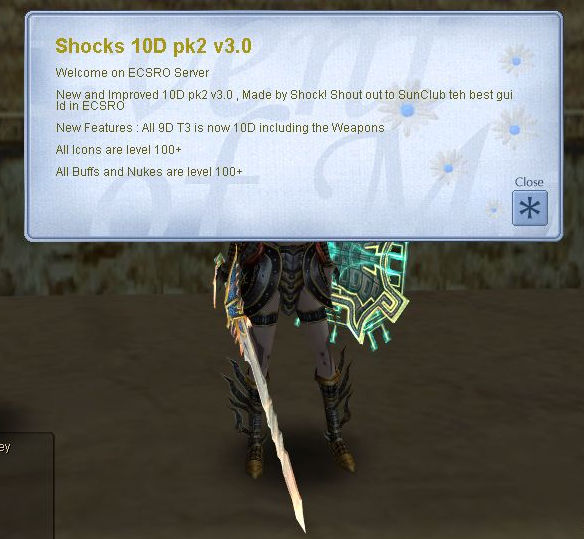 This my my media.pk2 I take full credit for it so when its released I don't want some little noobs saying they made it. Who ever helps me with the weapon skills , or anything you will have credit on this aswell. As of right now this is the only media.pk2 with these things added and only about 10people have this. I plan on going to maybe version 6. I can put anything from kSRO for ecsro. mobs , pets , ect.. anything

If any pk2 developers want to hit me up maybe we can get together add new under bar or some other things. Make some different textures I don't know we could think of something.
If you know how to use photoshop and pk2 underbars or pk2 anything really. Send me a private message.

Also if you have anything you would like added just post a comment. If its decent I will think about adding it. Please be mature about it no. 0mg add g0d m0de unlimited g0ld. Simple things like changing wolfs, grab pets , mounts, icons, textures really anything if you think of it. I know I cant think of everything so why don't you all help me out.

11/28 : I Decided to release this version to the public. I'm still having trouble with the weapon skills. So once again if anyone can help me. Send me a private message it would be really appreciated.​